When a diverse group of delegates gathered at last year’s Second Cities: Smaller and Smarter Symposium in Newcastle to discuss how we can realise the potential of our region, there was one message that resonated above all others: the need for a unified voice to advocate for the Hunter. Without one, strong voice, the Hunter has struggled to capture the imagination and harness the support of decision-makers in Macquarie Street and on Capital Hill.

The Committee for the Hunter will be that unified voice; an independent and non-partisan group that brings together business, industry and community leaders with the common goal of driving growth, prosperity and diversity in the Hunter. We recognise that Newcastle and the Hunter Region are on the cusp of significant change and will advocate for the government recognition and support needed to realise the significant opportunities ahead.

We see a future for the Hunter as Australia’s leading regional economy, with a vibrant revitalised metropolitan city at its heart, and share a vision for enhancing the economic, social, cultural and environmental assets of the region.

The committee’s unified advocacy will accelerate the Hunter region’s transformation as a liveable, smart region – a magnet for investors, start-ups, residents and tourists. We will leverage our inherent strengths to become one of the nation’s most diverse, innovative and thriving economies; developing businesses, industries and jobs of the future in a region that offers a rare and highly valued balance of opportunity and lifestyle.

The Committee for the Hunter seeks to formalise collaborative relationships for the benefit of the Hunter. It unites key regional stakeholders and peak organisations. The founding committee members are the University of Newcastle, Hunter Business Chamber, Newcastle Airport, Property Council of Australia, Urban Development Institute of Australia, HunterNet and the Port of Newcastle. As the Committee develops, we anticipate it will grow to encompass many other community, business and industry stakeholders, representing a diverse cross-section of our region.

The role of the Committee was acknowledged in the Greater Newcastle Metropolitan Plan, which says:  ‘[The] committee is an independent body providing civic leadership and championing the success of the Hunter region, including the metropolitan area. They will advise on metropolitan-scale issues through collaboration between community, industry and government.’

With both state and federal elections imminent, the committee’s first task has been to develop a portfolio of regional priorities.  The priorities we have identified are based on their potential social and economic impact for the Hunter Region, Northern NSW and beyond.

The projects will see a diversification in the Hunter economy with new industries attracted to the region, whether it is to the John Hunter Health and Innovation precinct, the diversified Newcastle Port or the Williamtown Special Activation Precinct.

We have also identified projects to support residential growth, to enable a strong and diversified workforce. The proposed Hunter Housing Delivery Fund, the Broadmeadow precinct and the delivery of an Integrated Transport Solution will support a sustainable Hunter region for future generations.

The committee’s advocacy priorities are focused on achieving growth that will benefit not only our region, but will also boost the economies of New South Wales and Australia.

At $51 billion, the gross regional product of the Hunter region is about double that of both Tasmania and the Northern Territory, one third greater than the GRP of the ACT and equal to about half the GRP of South Australia. Similarly, the region’s population is triple that of the Northern Territory, about 50 per cent greater than each of Tasmania and the ACT and nearly half that of South Australia. By any measure, our region is a significant contributor on a national scale and a key economic driver for the state.

Through consultation with our stakeholders, we have drawn together a platform of initiatives and policies that we believe make good economic sense. They will deliver significant economic social benefits for the Hunter community, with a multiplier effect that ensures those benefits are shared much further afield.

When you consider where we stand in terms of the size of our population and regional economy, we should not be reticent in advocating strongly through a non-partisan approach for investment in key enabling infrastructure, together with policy settings, which will attract private sector investment both from current and new players in our market. With the region’s population predicted to grow to around one million by 2036, our contribution to the State and national economies will only be enhanced by this investment.

As the Committee for the Hunter, we look forward to working with government and stakeholders in the realisation of these priorities and to working with our community to make the region an even more attractive place to live and work. 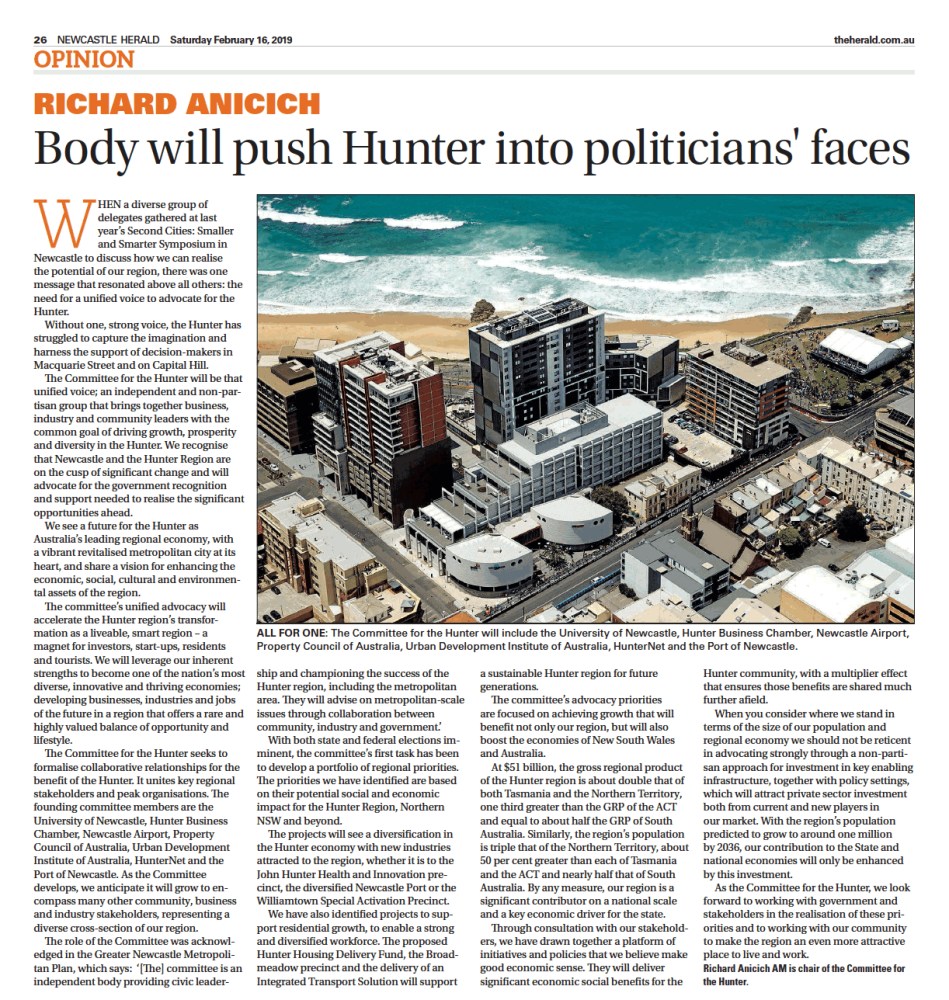