New Group Aims To Be A Regional Voice

In this space on New Year’s Day, the Newcastle Herald observed that whatever happened this year, our fortunes would be determined to some degree or another by our interactions with Canberra and Macquarie Street.

Noting that we lacked a single organisation able to articulate a vision for the Hunter as a whole, the Herald wondered whether such an idea might be a worthwhile ambition for the year ahead.

Soon after, Hunter Business Chamber director Richard Anicich responded by saying that while we needed a strong voice, existing organisations were doing a good job. Rather than form what he called “yet another peak body”,

Mr Anicich favoured a model in which “existing bodies contribute their expertise and resources to speak as one voice”. Now, almost eight months later, the vision has become a reality with an organisation calling itself the Committee for the Hunter.

The inaugural members are the business chamber, the Hunter chapters of the Property Council of Australia and the Urban Development Institute of Australia, the industry network HunterNet, the University of Newcastle, the privatised Port of Newcastle and Newcastle Airport.

Inspired at least partly by such organisations as the Committee for Sydney and the Committee for Geelong, the Hunter committee aims to articulate a medium to long-term vision for the region, and to maximise our chances of government backing for infrastructure improvements.

Although the Coalition state government is spending heavily in the Newcastle CBD on the light rail project, other funding and planning decisions seem to have consistently gone against this region.

The repeated refusal to fund the road bridge at the heart of the Lake Macquarie transport interchange, and the restrictions placed on container traffic through the privatised port, are two of the more obvious examples.

A strong voice to lobby on such issues is precisely what we called for at the start of the year, and to that extent, the creation of the new committee is a positive development.

But it needs to remember that it is not an elected body, and in a region where Labor has traditionally been the party of choice, it will need to take care to ensure that whatever issues it does end up promoting are supported by the broad majority of the population.

That is the only way it can truly call itself the Committee for the Hunter. 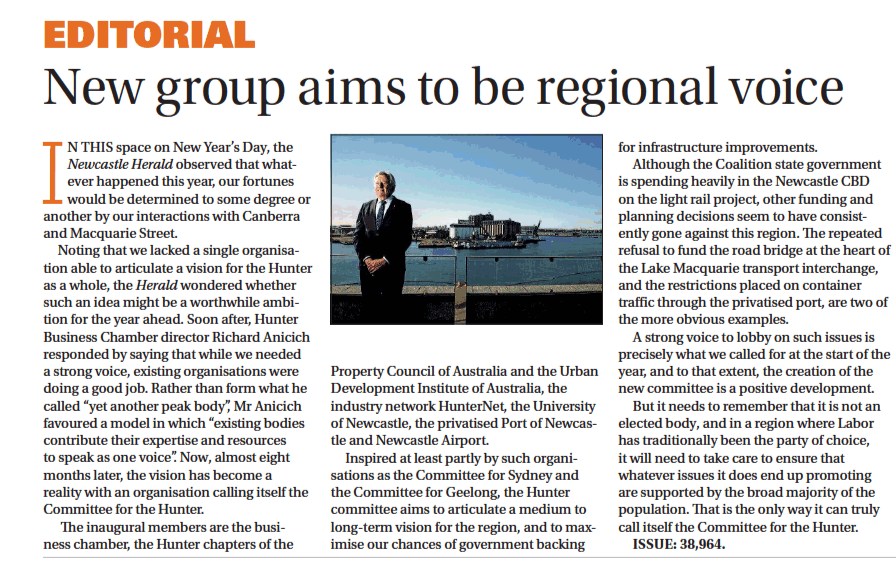