Newcastle citizen activist Richard Anicich announced last week the formation of the Committee for the Hunter.

The goal of the committee, as reported by the Newcastle Herald , is to articulate a clear message to funding bodies and decision makers about the needs of the Hunter.

Mr Anicich revealed that the inaugural members of the committee were Hunter Business Chamber, local chapters of the Property Council of Australia and the Urban Development Institute of Australia, industry network HunterNet, University of Newcastle, Port of Newcastle and Newcastle Airport.

The initiative is a bold one.

There is no doubt Newcastle and the Hunter need better communications with government to claim a fairer share of the wealth they create for the nation.
At the very least, the region needs a more consistent list of infrastructure demands.

We are more than a little impulsive in this regard.

But can the committee have success in a region littered with the rusty filing cabinets of former committees, filled with good intention that yielded not too much?
A history needs re-telling.

It starts, perhaps, when the idea of the Hunter as needing a common voice emerged from the 1955 floodwaters with the establishment of the Hunter Valley Research Foundation (HVRF).

The HVRF was instrumental in making well-researched arguments for whole-of-valley flood mitigation measures and it subsequently turned its attention to the region’s economic and labour market adjustment needs.

Showing the merit of quality knowledge production, the HVRF continues to thrive, now badged as the Hunter Research Foundation at the University of Newcastle.

In the 1970s, the Hunter Development Board (HDB) was founded in an attempt to build a coalition of industry partners to pursue income and jobs growth for the region.

Yet the HDB’s role in regional coordination was displaced dramatically in the late 1980s by the formation of the Hunter Economic Development Council (HEDC), a partisan initiative of the new Coalition government designed to boost business interests in economic planning for the region.

But then by the mid-1990s the HEDC was itself competing with a number of new bodies.

Most were created by the federal Labor government in response to the regional impacts of lower tariffs and recession.

So the Hunter played host to the Hunter Regional Development Organisation, the Hunter Area Consultative Committee and HunterNet.

Later that decade this raft of state and federal government agencies was joined by committees set up to assist the Hunter survive the closure of the BHP steelworks, notably the Common Purpose Group and the Hunter Advantage Fund.

In 2001, one researcher counted 36 bodies claiming some sort of coordination role for the Hunter. Finally, we were world famous for something.

Many of these organisations have since disappeared, although a surprising number still have shingles hanging. What then can a Committee for the Hunter offer where so many have failed?

Some lessons can be learned.

One is that regional organisations set up by state and federal governments are not good ideas.

Invariably, as in the Hunter’s history, these bodies serve Macquarie Street or Canberra, not the region.

The Hunter needs an uncompromising, enduring voice that won’t be silenced by outside pressure.

Another is the need for inclusiveness.

A regional body has to be genuinely representative, embracing the interests and needs of rural and urban alike, and of the various segments of the community, not just those dressed in suits in harbourside offices.

Financial sponsorship is also an issue.

There is a lesson here from the Committee for Sydney.

Try as it may to masquerade as a think tank acting in the interests of Sydneysiders more broadly, the Committee for Sydney’s activities focus on the big end of town and the advancement of the interests of its wealthy sponsors, many of whom are from (surprise) the property development sector.

One can only presume the Committee for the Hunter will similarly privilege the concerns of its sponsors, a list that is dominated by property developers of one form or another.

Yet we live in a region where there isn’t consensus on development – think coal, think over-development along the coastline, think sprawling sub-divisions over the region’s prime farmland.

Forging a single, clear message about the Hunter for dispatch to Macquarie Street and Canberra could well be an impossible task. 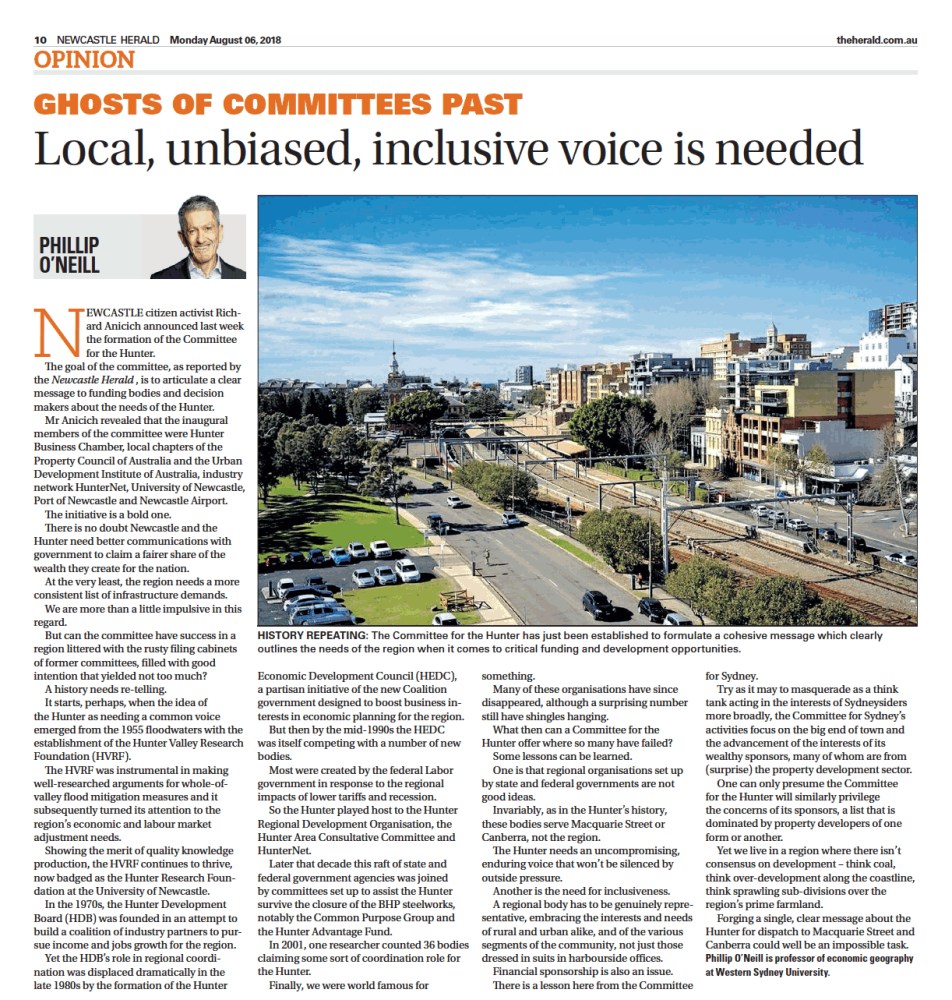