Committee A New Voice For The Hunter

An alliance of prominent Hunter bodies have banded together to form a Committee for the Hunter, an organisation that Chair Richard Anicich says will provide a unified voice for the region.

The Hunter had been criticised in the past for having too many representative bodies and Mr Anicich said pulling major ‘thought leaders’ into a single organisation would hopefully make it easier for the region to articulate its needs when dealing with funding bodies and decision makers.

He said the inaugural members were the Hunter Business Chamber, the Hunter chapters of the Property Council of Australia and the Urban Development Institute of Australia, the industry network Hunternet, the University of Newcastle, the privatised Port of Newcastle and Newcastle Airport.

Asked whether organisations such as the union body Hunter Workers had been invited, Mr Anicich said the final shape of the committee – which he described as ‘a network of networks’ – had not been finalised.

A memorandum of understanding has been signed by the participants “as an initial step” in working together to “foster success across the Hunter region and the business community” by having “a unified approach and voice in dealing with all three levels of government”.

By doing this, the community hoped to attract investment and economic development and enhance the conditions that “make the Hunter an attractive place to live and work”.

Mr Anicich said the committee had already met four or five times. In the next few weeks it would finalise a list of the “major projects for the region” – a set of “high-level priorities that the committee would seek to advocate”.

He said the various Hunter councils, its state and federal MPs and various government departments had been briefed about the formation of the committee and its desire to “drive growth and jobs for the region”. 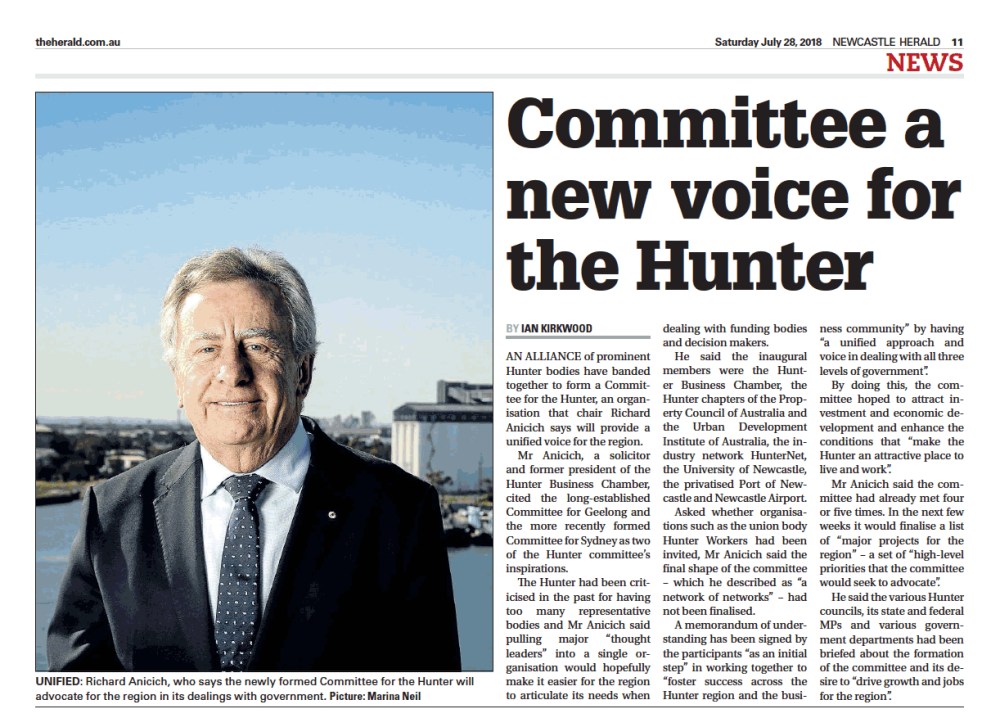